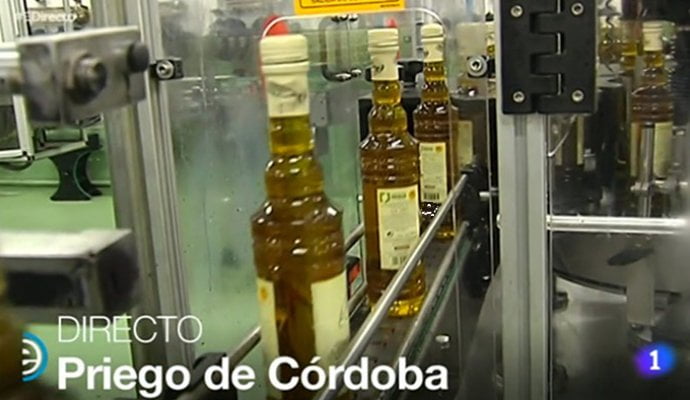 29 Jan Venta El Barón, named the best oil in the world, has our drop-stopper closures and spill control closures

Venta del Barón virgin olive oil, from Mueloliva, has been recognized as the best oil in Spain for the fourth consecutive year. On January 24, the Spanish Television programme España Directo(Spain Direct), broadcast a report on the excellence of this oil, Priego de Córdoba.

The programme, recorded at the Venta del Barón facilities, examines the oil bottling and closing process. The fitting of our Olea stoppers, manufactured for the HORECA sector, is covered very well by the programme.

The genius of the Olea closures of the Torrent Group for virgin olive oil lies in its unbeatable drop-stopper, which prevents the bottle from overflowing with oil and staining. On the other hand, it has dispenser systems that allow different levels of discharge. The Olea model is a pilfer-proof stopper solution, which shows the first opening of the bottle and contains a safety valve that protects it against re-filling. This stopper has been developed to be applied on the same bottle mouth and with the same equipment used to fix other pilfer-proof dispensers.

At present, we are world leaders in the production of dispenser stoppers for glass bottles, and we have an extensive variety of customized closure solutions that adapt to the demands or needs of each customer.

Olive oil is considered the star product of Spanish cuisine. Its national and international recognition confirms this. It is now obligatory to present it with the labelling and packaging that certifies its origin and quality, as is the case of wine and water.

Torrent Group Olea, Gades and Captor stoppers for HORECA sector olive oils meet all the requirements demanded by the regulation recently approved by the Spanish Government. Bars and restaurants have to use non-refillable bottling on the table for oil.  In addition to incorporating controlled spill and dropper systems, our stoppers provide great decorative options.

MANY THANKS TO VENTA EL BARÓN FOR CHOOSING OUR STOPPERS!