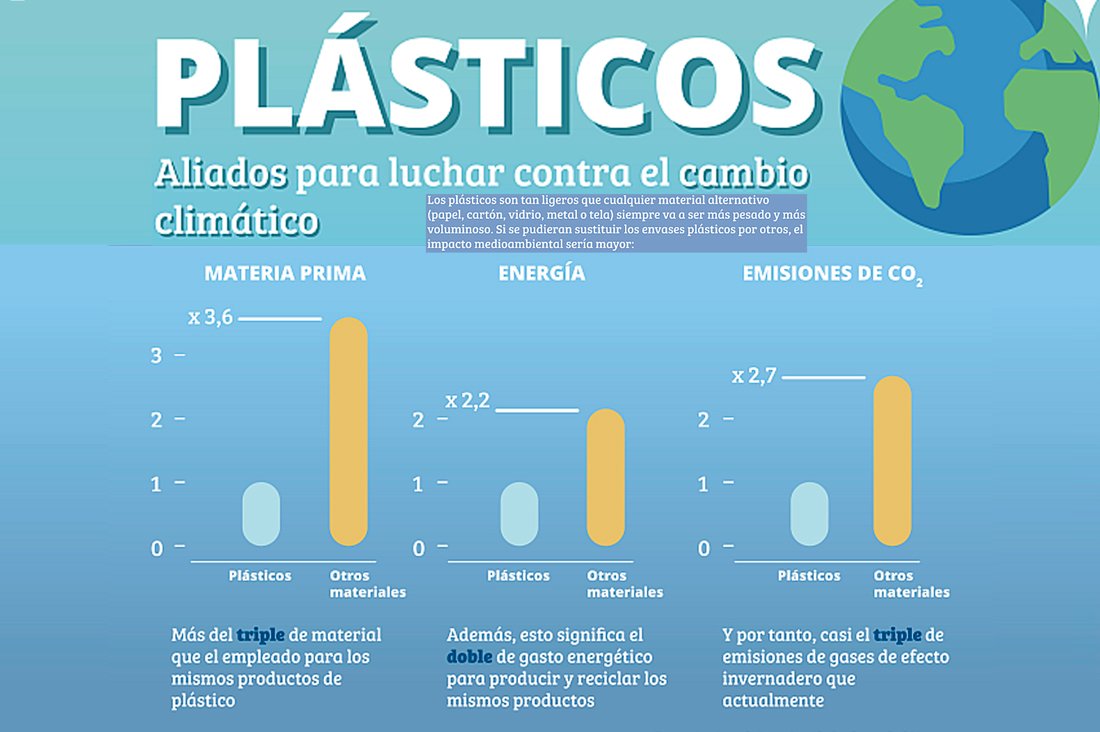 16 Dec Did you know that replacing plastics would triplicate the greenhouse gas emissions and twice the amount of energy would be used per year?

This chilling data has been presented in Madrid during the United Nations Climate Change Conference. (COP25) by the spokesperson of the EsPlástico Platform, Ignacio Marco, who has warned about the climate cost for replacing all plastic packaging at a worldwide level: “Twice as much energy would be used per year (2,250 million GJ compared to the current 1,010 million), triple the amount of greenhouse gas emissions (97.4 million tons compared to 36.6 million) would be issued and (3.6) the consumption of matter (66 million tons compared to 18.4 million) for the same products would be quadrupled”

In an EsPlásticos press release, and picked up by media channels, the Platform has launched an appeal supporting the importance of plastics in the fight against climate change, highlighting the role of long-life plastics in this fight. On the other hand, the platform warns that the necessary social debate on abandoned waste has focused on the substitution of some materials for others without addressing the impact of this strategy on climate change, nor influencing the source of the problem: the management of waste at a global level.

The EsPlásticos spokesperson recalled that “food packaging is a sophisticated protection mechanism against diseases, and extends the shelf life of products, which means 50% less CO₂ and methane emissions by avoiding food waste”.

The platform has emphasized that tackling a waste problem incorrectly can lead to an even greater emission problem, without solving the issue of marine litter. One of EsPlásticos’ interests is to open a scientific debate on the results, and the climatic cost of some of the plastic substitutes that are proposed.

Luis Cediel, an Industrial Engineer and spokesman for the platform, has pointed out that “when one compares a plastic container with one of another material, it is easy to see that the former is always the lightest and, therefore, consumes less resources and energy, and produces less emissions”. Cediel reflected on these alternatives and warned, for example, that changing a plastic bottle for a container such as carton (only because it looks like cardboard) produces more emissions and “complicates recycling, since it contains aluminium and plastic”.

The spokesman recalled that alternatives such as cans “require a recycling process that uses too much energy, while glasses, despite being reusable, are more fragile and insecure, and consume a lot of energy during their manufacture and transport, are heavy and also require temperatures of 1,500 degrees compared to 300 in plastic ”.

Much more than a single use: long-life CO2 plastics

For his part, José Antonio Costa, also spokesman for the platform and a degree in Theoretical Physics, he valued the innovative capacity and the contribution of long-lasting plastics to the fight against emissions.

Costa recalled that “most of the plastics have a shelf life that ranges from five to 50 years, and performs essential functions for the fight against climate change such as energy insulation in homes, or computer technology”.

The plastics sector encompasses some 3,000 institutions and companies producing, processing and recycling, and they are mostly SMEs (98%). Isabel Goyena, a Chemical Scientist and spokesperson for the platform, recalls that Spain recycles more than 1 million tons of plastic per year and is the second highest recycler of plastic in Europe. “The solution to the waste problem must be part of the circular economy and the responsible consumption of all materials, through awareness and waste management systems at a global level, and not by replacing some materials with others.”.

Similarly, Goyena pointed out that “asking to ban plastics in a demonstration defending the climate is a contradiction in itself, given all the emissions savings generated during their use and subsequent recycling. The problem of marine litter is an educational problem: when what ends in the sea is a glass bottle, or a can, our conscience cannot be clear either”.